Q&A Session
The French Federation offered to test the new scoring system at the CAI in Le Pin au Haras (FRA) in July, which would give the opportunity for National Federations to assess the proposed system during an Event and provide their feedback as part of the Rules revision process. Károly Fugli noted the offer and will put it to the FEI Driving Committee for consideration.
Károly Fugli also confirmed that proposed amendments to starting orders, entries for championships, and obstacles in the Marathon will be included in the full Rules Revision. He also noted a suggestion from the French Federation representative for consideration of an additional proposal for the Cones format for the FEI Driving Rules.
During the discussions, panellists provided clarifications on Dressage penalties, as well as time allowed and starts in the Marathon and Cones competitions. The discussion also highlighted the importance of the additional unharnessed horse inspections which are focused on the welfare of the horse.
Based on the feedback from the session, and ongoing consultation with the community, the FEI will prepare and publish the first draft of the proposed Driving Rule changes on 12 July 2021. National Federations and MOU stakeholders will then have seven weeks to review the first draft to make comments and/or propose any changes, prior to the publication of the final draft on 17 October. The Driving Rules will then be voted on at the FEI General Assembly in November. 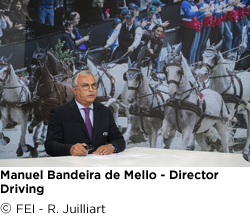