FEI SF 2021 - Session 3: Shaping the future together for Grooms

Session 3: Grooms'integration
Wednesday 2 June 2021, 12:00 CEST
The opening Session of Day 2 was dedicated to Grooms, a vital stakeholder group which has not previously been formally recognised by the FEI and the international equestrian community.
The FEI President, who initiated the first engagement with the Grooms community back in 2017, led the session with a panel of speakers representing the interests of Grooms, Athletes, Owners, Organisers, Officials and National Federations, with discussions providing a 360° view of the status and needs of the Grooms community.
“Grooms play a very important role in our sport, in the day to day life of equine and human athletes and at equestrian competitions, whatever the level may be,” FEI President Ingmar De Vos said in his opening remarks to the session. “I don’t think anyone needs to be convinced that they are key for the welfare of our horses and in many cases also for the well-being of our human athletes.
“For this reason I have never understood why this essential role - which also represents a large number of individuals - has never been officially recognised by the FEI as a specific stakeholder group. We do refer to Grooms in some of our rules, but this does not constitute an official status per se. I really believe now is the time to rectify this huge oversight and to officially recognise and integrate Grooms in our organisation and community.”
The discussion panel was made up of Jackie Potts (GBR), Lucy Katan (BGA), Pedro Veniss (BRA), Robin Parsky (USA), Peter Bollen (BEL), Susanne Macken (IRL), Chris Webb (AUS) and Frank Kemperman (NED).
During the session, FEI Director of Information & Sports Technology Gaspard Dufour highlighted the self-registration system currently in place for Grooms and the FEI HorseApp modules that are being developed to allow Grooms to enter horse temperatures at Events in line with current EHV-1 by-laws in mainland Europe.
Participants also heard from FEI Director of Education Frank Spadinger, who provided an overview of the educational resources for Grooms available on FEI Campus. FEI Tutor Susanne Macken provided insights into the FEI Solidarity Courses for Grooms, which she has delivered around the world since 2012. These courses are available on FEI Campus in both English and Spanish.
Lucy Katan, Executive Director of the British Grooms Association (BGA), took the floor to talk about the creation of an International Grooms Association (IGA), an independent, not-for-profit, professional association with a vision and mission to improving the status of Grooms worldwide. She also outlined the membership requirements, governance and administrative structures of such an organisation.
There was general consensus among panellists about the need for official recognition for Grooms within the community. The participants were also very supportive of the initiatives presented and forthcoming with their own suggestions and ideas, including a recommendation from a Bahraini Jumping and Endurance Judge to add Grooms in the start and results lists, which was warmly welcomed by Lucy Katan who also encouraged all National Federations to include the names of Grooms on the team announcement for the upcoming Olympic & Paralympic Games. This simple and cost effective recommendation received widespread support from panellists as well as from those viewing the session remotely.

Several areas for advancement were identified during the discussions:

The Session ended with the following key conclusions:

Support for the creation of an International Grooms Association (IGA)
The proposal to create the International Grooms Association (IGA) to give Grooms a unified voice within official decision-making processes has the full support of the FEI, and also of the stakeholders groups represented in the session. A Memorandum of Understanding (MOU) will be established over the coming month between the FEI and the IGA to formalise the partnership.

Creation of Grooms Consultative Group
The session provided the opportunity for the FEI President to announce that a Grooms Consultative Group will be set up by the FEI and will be led by FEI Executive Board Member Frank Kemperman (NED). The Group will be made up of IGA representatives, Owners, Athletes, representatives of Organising Committees, Stewards and National Federations. The Group’s mission is to define a roadmap for the development of key structures for the Grooms community, including the creation of a charter of rights and obligations for Grooms.

The FEI President wound up the almost two-hour session on a very positive note.
“We have set in motion the wheels for the future of the Grooms community,” he said.
“There will soon be a representative body and we will have a consultative group to set a framework and a roadmap for the integration and official recognition of the Grooms.
“Today is a very important and special day because for the first time in the 100 years of existence of the FEI, we now officially recognise Grooms. Not only have we recognised them, but we also have a clear way forward and a plan of action.” 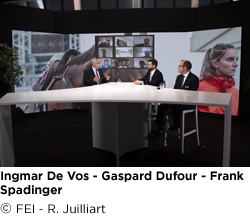 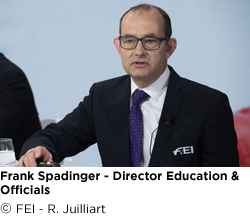 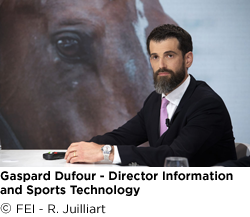