Host cities for key Youth Championships and Finals have been finalised for 2022 and 2023, with allocations agreed by the FEI Board at its in person meeting as part of the FEI Hybrid General Assembly in Antwerp (BEL) on Sunday.

Following the restart of the FEI Jumping Children’s Classics in 2021, the FEI Board awarded next year’s Final to Guadalajara (MEX). The Final will be held from 17-20 February 2022.

The Board allocated the FEI Dressage European Championship for Juniors and Children to Kronberg (GER), 20-23 July 2023, and the FEI Driving World Championships For Ponies Four In Hand/Pairs/Singles to Oirschot (NED), 23-27 August or 30 August to 3 September 2023.

“It is such a pleasure to see the calendar for Youth Championships over the next few years taking shape,” FEI President Ingmar De Vos said.

“Youth events are so important for the growth of our sport and an opportunity for the next generation of equestrian stars to build up the mental acuity, stamina and drive that will take them to the next stage of their sporting careers. That we have such experienced organisers coming forward to hold these events is a sign that the community is committed to the future growth and development of our sport.”

Youth development is a key focus of the FEI’s work. In addition to the events allocated today, in 2022 the equestrian community will also see the FEI Youth Equestrian Games in Aachen and the FEI Dressage European U25 Championship to Pilisjàszfallu (HUN).

Following the International Olympic Committee (IOC) decision to postpone the Youth Olympic Games (YOG) 2022 in Dakar (SEN) until 2026, the FEI sought IOC agreement for a replacement competition. The FEI Youth Equestrian Games Aachen 2022, which will be held from 28 June to 3 July 2022, will give young athletes aged 14-18 the opportunity to participate in a global competition based on the unique YOG format.

The FEI Youth Equestrian Games will see 30 athletes from 30 nations across six continents participating in a continental team competition and an individual competition.

“It was important for the FEI to find a replacement to the Youth Olympic Games as I did not want to deprive a whole youth generation of the Olympic dream, after all this is the event which launched the careers of equestrian stars of today, like Switzerland’s multi-medalled Swiss athlete Martin Fuchs,” FEI President Ingmar De Vos explained.

“The youth are our future and we need to safeguard their development and find ways of keeping them engaged in equestrian sport so that new generations of athletes continue to be inspired to make the Olympic Games their goal.”

Based on the IOC YOG Programme, the FEI Youth Equestrian Games Aachen 2022 will also host a Culture and Education Programme (CEP). This will run alongside the sports fixtures and focuses on the five themes of Olympism, Social Responsibility, Skills Development, Expression & Well-Being, and Healthy Lifestyles.

A full wrap-up of today’s FEI Board meeting is available here. Images of the FEI Hybrid General Assembly can be found on the FEI Flickr account. 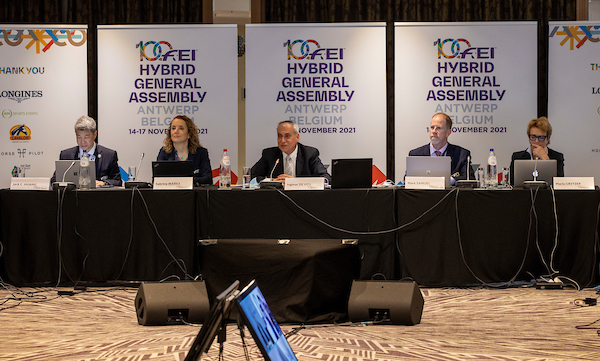