The FEI has signed a cooperation agreement with the National Reining Horse Association (NRHA) and the American Quarter Horse Association (AQHA), formalising the FEI’s relationship with the NRHA and AQHA that has been in place since Reining became an FEI discipline in 2002.

An exception has been made for the Alltech FEI World Equestrian Games™ 2014 in Normandy, where six-year-old horses will be eligible to compete.

“The FEI, NRHA and AQHA, while separate and distinct organisations, have recognised as the major stakeholders in the Reining world that together they can foster the growth of our sport globally, and this agreement is a major milestone in the expansion of Reining”, said Bob Thompson, FEI Reining Committee Chairman, who played a crucial role in formalising this agreement.

“Since Reining became an FEI discipline in 2002, we have worked closely with the NRHA and AQHA to grow the sport worldwide, and the expansion has been huge, with 115 Reining events last year compared to just five in 2002”, said Bettina de Rham, FEI Director Reining, Driving & Vaulting.

“FEI Reining will again be under the global spotlight this summer at the world’s biggest equestrian event, the Alltech FEI World Equestrian Games 2014, in the heart of Normandy. Just one month before, the FEI European Reining Championships for Young Riders and Juniors will take place in Switzerland at the beginning of July. Our busy Reining event calendar is a true reflection of just how popular Reining has become amongst athletes of all ages, and we’re looking forward to continuing our work with the NRHA and AQHA to foster further growth of Reining worldwide”.

The AQHA, located in Amarillo, Texas (USA), was created in 1940 and is the world’s largest equine breed registry and membership organisation. It first recognised Reining as a sport in 1949.

“The NRHA is very excited to be moving forward with its relationship with the FEI, and to growing the sport of Reining worldwide”, said Beth Himes, NRHA President.

Don Treadway, Executive Vice President of the AQHA added: “Since Reining became an FEI discipline in 2002, we have seen the sport introduced to several new countries, and we look forward to working closely together with the FEI to advance the worldwide growth of Reining well into the future.” 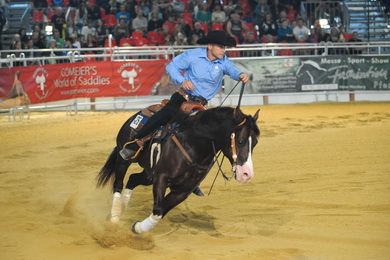