Peder Fredricson (SWE) took the Peden Bloodstock FEI Best Athlete Award, adding to his already impressive trophy cabinet of Olympic and European Championship medals, as well as his number one spot on the Longines World Ranking that he took in October 2021 for the first time in his career.

Along with winning individual silver at the Tokyo 2020 Olympic Games in August, his outstanding performances helped Sweden to its first Team Jumping Olympic gold medal in almost 100 years. The medal marked 29 years since Peder Fredricson made his Olympic debut at the age of 20 at the Barcelona 1992 Olympic Games, when he was an accomplished Eventer and the youngest-ever Olympic equestrian athlete for Sweden.

The now 49-year-old, who was unable to attend tonight’s gala dinner in person, thanked sponsor Peden Bloodstock’s Managing Director Martin Atock and everyone who voted for him in a video address.

“I’m really proud and grateful for the Peden Best Athlete Award. It means a lot to me, my team, and all my owners,” Fredricson said. “Thank you very much to the FEI, to Longines for the beautiful watch and also to Peden Bloodstock for supporting the Award. I would like to thank all the people who voted for me too. I’m also very excited to be number one in the Longines Rankings. It’s a goal I’ve had for a couple of years.

“I always try to do my best and improve myself, my team and the horses, rather than beat anyone else. We all work really hard to keep the horses fit and healthy, to achieve these goals and win many medals along the way. I’m also very grateful to my horse owners who stand by me and provide me this good string of horses. Thank you very much!”

Individual and team champion at this year’s FEI Eventing European Championships for Young Riders, and bronze medallist at the 2021 German National Championships for Young Riders, Greta Busacker is quickly making a name for herself in the sport. Her win made the FEI Awards a decidedly family affair, with her mother and Eventing legend Ingrid Klimke a recipient of the 2019 and 2020 Peden Bloodstock FEI Best Athlete Awards.

“I’m very pleased to receive the Longines FEI Rising Star Award. Words can’t describe how honoured I feel because there are so many young talented riders out there,” she said. “They work as hard I do and I get to stand here. This is for my whole team, my family, my friends. Without them I’d be nothing.”

She also paid tribute to her horse, the 10-year old Oldenburg gelding Scrabble, with whom she has been competing since 2019. “With Scrabble, I’ve learned to be patient. When I stand in the starting box and the countdown is on, I know that I can trust him one hundred percent. He has such courage and never gives up. Our connection is such a strong bond. Thank you Scrabble!”

“Young athletes like Greta are the future of equestrian sports and we are delighted and honoured to play a part in what we know will be a long and accomplished career,” he said.

“Longines presents an award which celebrates young talent, while telling their story of determination and passion for a sport. These young stars are the future of equestrian sports and we hope that they will continue to inspire budding equestrians around the world for many years to come.”

It was definitely Sweden’s night as Marie Johansson took the Cavalor FEI Best Groom Award, in recognition of her hard work and dedication in looking after Dressage athlete Patrik Kittel’s horses. Patrik and his wife Lyndal Oatley were on-hand to celebrate Marie Johansson’s win.

The award, presented by Cavalor Founder and Managing Director Peter Bollen, is given each year to grooms working behind the scenes to provide the best possible care for their equine athletes. The Longines’ Vice President Marketing presented an elegant timepiece to the winner for her outstanding achievement.

“This award means everything to me”, she said. “It’s amazing that we grooms can also be a part of this gala. I’m so happy about all the people who voted for me, it’s such a big thing. I’m super happy and super proud! Really!”

Presented by FEI President Ingmar De Vos, Chair of the FEI Solidarity Committee, the award is given each year to an equestrian development project or an individual or organisation that has demonstrated skill, dedication and energy in expanding equestrian sport.

To celebrate the FEI Awards and pay tribute to China’s time-honoured tradition of valuing and cherishing horses, Michelle Wang Qiang has written, in calligraphy, an iconic text on how to identify an exceptional horse by eighth century Tang Dynasty scholar, poet and government official Han Yu. She has dedicated her calligraphy work to the FEI Awards Ceremony.

Taking the FEI Against All Odds Award was Beatrice de Lavalette (USA), who lost both legs in the March 2016 terrorist attack at the Zaventem Airport in Brussels (BEL) and went on to make her first Paralympic debut in Tokyo earlier this year in the sport of Para Dressage.

The Award, which is given to someone who has pursued their equestrian ambitions despite a physical handicap or extremely difficult personal circumstances, was presented by FEI Secretary General Sabrina Ibáñez and President of the Belgian Paralympic Committee Anne d'Ieteren. To further recognise Beatrice de Lavalette’s accomplishment, the Longines’ Vice President Marketing rewarded the winner with a refined timepiece.

“The Against All Odds Award means everything”, Beatrice de Lavalette said. “The FEI stands for the highest standard of competition I can achieve, so being recognised by them is awesome and a true honour. It shows me that everything I have done these five or six years has been seen and people have realised how big it really is.”

“As a result of the attack, I lost a part of myself and my freedom. It took me a while to get through my sadness of losing my legs, losing my ability to walk, and waking up in a completely different life. Every time I get on a horse, I gain my freedom back. I get to ride a horse almost as everybody else. I get to ride a horse pretty damn well. I love doing it. Experimenting and doing different things with the horses gives a sense of power that I often lose being in a chair. So having that sense of freedom and that power back means everything.

This year’s winners were decided by combining 50% of the public votes cast on FEI.org and on the Chinese social media platform WeChat, and 50% of the judges’ votes.

More than 300 distinguished guests, including local sporting legends, National Federations, FEI partners and stakeholders attended the 13th FEI Awards, with equestrian commentator Steven Wilde (GBR) acting as Master of Ceremonies. Also present in Antwerp were all of the 2020 Award winners from 2020 - Ingrid Klimke, Semmieke Rothenberger, Carmen Thiemann, Angelika Trabert, Ebony Horse Club and - who were invited to join in the celebration following the cancellation of last year’s ceremony due to the pandemic.

“This is the first time since 2019 that we have been able to celebrate the stars of our sport in person,” FEI President Ingmar De Vos said. “The global pandemic and the EHV-1 outbreak have been very tough on our industry, and I am pleased that we had the opportunity to bring together the community to celebrate these achievements tonight.

“This edition of the FEI Awards is special for me, not just because it is being held in a city close to my home in Belgium, but also because it is the FEI’s Centennial year. These Awards, and the high calibre of nominees every year, continue to be a testament to the growth of our sport and gives us great hope for the future.” 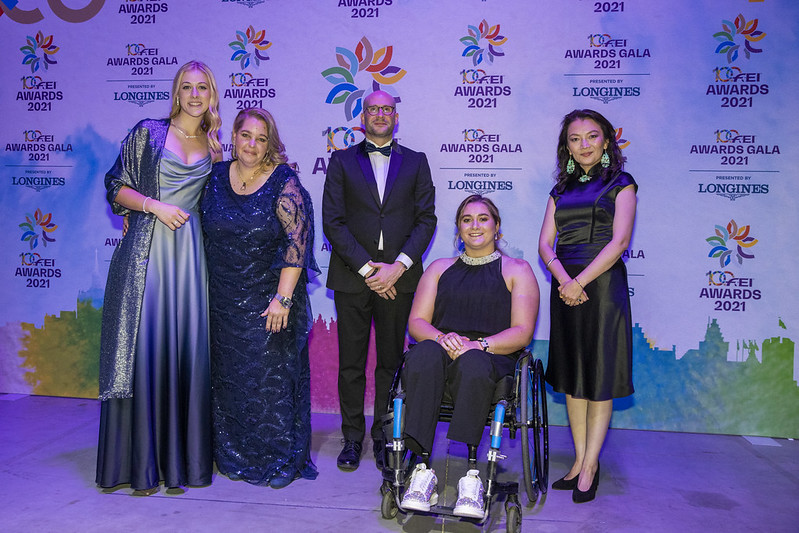