The FEI and Top Partner Longines have created the #MyDreamJump Challenge, an exciting fan engagement activation giving equestrian fans a once-in-a-lifetime chance to have their original design for an obstacle built by Longines for the Final of the Longines FEI Jumping World Cup™ in Omaha (USA) in 2023.

The activation was created to give fans an insight into the elements that go into designing a challenging obstacle course for the horse and athlete, while giving them the opportunity to achieve the best possible result: a clear round within the set time. 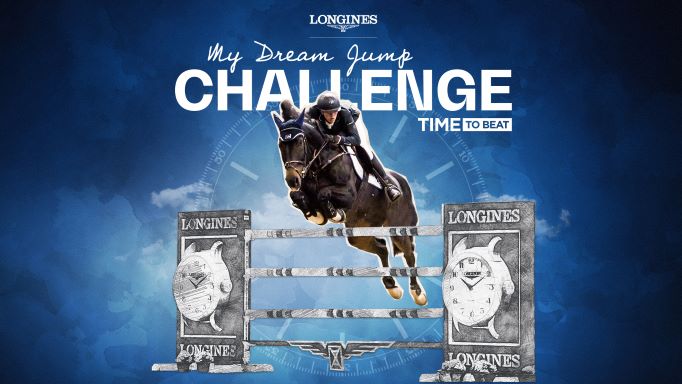 “The FEI’s partnership with Longines has evolved and grown tremendously over the past decade, and this Challenge is just one example of the many creative initiatives that has kept our collaboration fresh and exciting,” FEI Commercial Director Ralph Straus said.

“Athletes count on designers to create a course that tests the limits of their sporting relationship with their horse. And the #MyDreamJump challenge is a nod to the talent and mastery that takes place on the field-of-play when horse, athlete and course design come together in competition.

“We hope that our equestrian fans will get to see another side of the competition experience through this Challenge, and will use their artistic abilities to increase their connection to the sport. Given the diversity of equestrian fans around the world, we look forward to receiving a large array of designs and creative input reflecting the sport’s global appeal and reach.”

The #MyDreamJump Challenge follows the successful #HorseOClock initiative which was also created in conjunction with Top Partner Longines. In 2020, #HorseOClock was run on the FEI’s digital channels, giving fans the opportunity to answer equestrian related questions to determine the watch that matched their personality.

“Longines is proud of the strong partnership established with the FEI since 2013, which has made the brand a major player in the equestrian universe,” said Longines Vice President of Marketing Matthieu Baumgartner.

“The #MyDreamJump Challenge is the perfect opportunity to celebrate this major 10-year anniversary with our friends of the equestrian sports around the world and we are looking forward to receiving all the drawings.”

Submissions to the #MyDreamJump Challenge can be made from 1 September until 9 October at https://mydreamjump.fei.org/

A jury composed of Longines and FEI representatives, USA Jumping athletes Lillie Keenan and Brian Moggre, and world renowned Tokyo 2020 Olympic course designer Santiago Varela (ESP) will make a pre-selection of the designs. The shortlist will be announced on the FEI’s Instagram account (@fei_global) on 24 October.

A public voting phase will take place on FEI’s Instagram from 24 October to 13 November, and the winners of the Challenge will be announced on 21 November.

The shortlisted entry with the highest number of Instagram reactions will take first place in the ‘Global’ category. The winner will receive a Longines watch and a chance to be flown to the Longines FEI Jumping World Cup™ Final in Omaha (USA), which will take place from 4 to 8 April 2023, to see their obstacle design in person.

The winning designs for both the ‘Creativity’ and ‘Elegance’ categories will be selected by the jury, and the winners will receive a giveaway kit from Longines.

All participants will be entered in a draw to win one of five FEI.tv annual subscriptions. 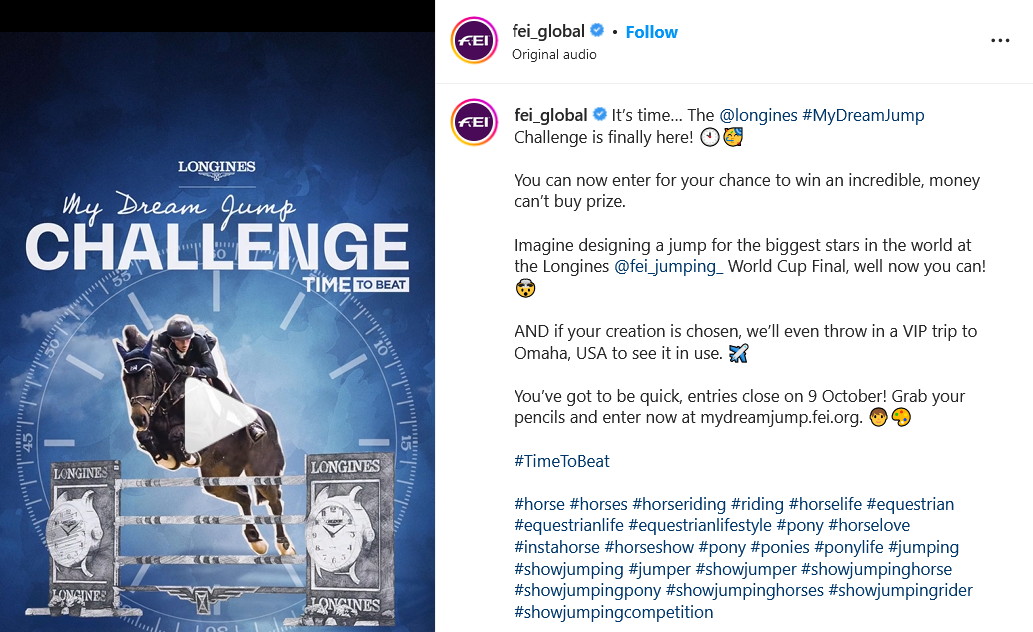 Longines has been the FEI’s Top Partner since January 2013, following the agreement of a historic very long-term sponsorship deal that saw the Swiss watchmaker become the Official Top Partner, Official Timekeeper and Official Watch of the FEI.