Swiss Olympic Eventing medallist Anton Bühler passed away on 29 March at the age of 90. Bühler won Eventing team silver and individual bronze at the Rome Olympic Games in 1960, Switzerland’s only Olympic medals in this discipline to date.

Anton “Tony” Bühler, the second of four children, was born near Zurich on 15 June 1922 into a family of great horsemen. His father, Hans E. Bühler, competed in both Jumping and Eventing at the Paris 1924 Olympic Games and was a member of the Swiss team which won the Aga Khan trophy at the Dublin Horse Show in 1926. Hans Bühler became the young Anton’s first riding instructor.

From 1942 to 1945 Anton Bühler served in the Swiss Cavalry where he had the opportunity to compete in Jumping and in racing. After the war, he embarked on a highly successful Eventing career representing Switzerland at three Olympic Games: in 1948 in London with Amour-Amour; in 1960 in Rome riding Gay Spark where he won two medals; and in 1972 in Munich aboard Wukari. Bühler, a six-time national Eventing champion, competed twice at the Badminton Horse Trials – in 1951 with Werwolf and in 1968 on Green Flash – completing the event on both occasions.

He retired from international competition after the 1972 Olympic Games, but continued riding well into his 70s, as well as organising numerous national events and championships. Anton Bühler was also a well-respected FEI judge, serving as President of the Ground Jury at the Seoul 1988 Olympic Games.

“Tony Bühler was one of the great names in Eventing,” FEI Eventing Director Catrin Norinder commented. “I would like to pay tribute to a real gentleman who was a very successful rider, an appreciated official and an enthusiastic friend of our sport. He will be greatly missed.”

The Lord Carew, former chair of the FEI Eventing committee, described Anton Bühler as “a wonderful horseman, an excellent and very knowledgeable three-day-event judge, a father figure in the discipline of Eventing and a man who commanded huge respect. His death is a great loss to the FEI family.”

Fellow retired FEI judge Bernd Springorum also mourned his passing. “Tony Bühler, Olympic medallist and leading FEI official in his era, gained his reputation through great experience in the horse world, independence and straightness. We will miss a great personality and a great friend.”

The FEI expresses its sincere condolences to Anton Bühler’s family, to his numerous friends in Switzerland and abroad, and to the Swiss equestrian community.

A memorial service will take place on Friday 5 April at 13.45 at the church of Berg am Irchel near Zurich.

Photo caption: Anton Bühler, Swiss Olympic Eventing medallist, who has died at the age of 90. 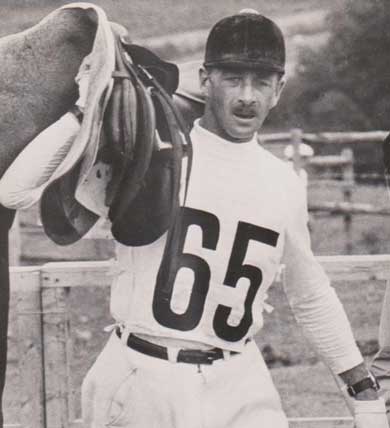