This weekend the renowned French show Le Jumping International de Bordeaux will play host to the FEI World Cup™ Driving Final 2015, one of the highlights on the international equestrian calendar, for the fourth time in a row. Six of the world’s best four-in-hand drivers representing four nations have earned their tickets to what is set to be a breath-taking event. The qualification phase of the series took place over seven legs held from November 2014 to January 2015. Five-time FEI World Cup™ Driving champion Boyd Exell (AUS), who won four out of the six competitions in which he took part, is the favourite to conquer the much coveted FEI World Cup™ Driving champion 2015 title. But it won’t be an easy job for Exell who will face fierce competition from his Dutch opponent Koos de Ronde, winner of three out of four competitions.

"We have had a great FEI World Cup season and the level is getting higher each year,” Károly Fugli (HUN), Chairman of the Driving Technical Committee, said. “The results of the drivers are getting tighter, which is excellent for the sport.

“Sooner or later we will have to look into the development of the FEI World Cup Driving. More and more organisers would like to host a leg and we might therefore have to consider raising the number of athletes who can qualify for the series. There is always room for improvement even though the format at the moment is brilliant as it is. It includes drama, winning and losing and all that within one hour! And the most important thing is that spectators understand and enjoy the indoor driving sport. This will hopefully lead to more spectators attending the outdoor events," Fugli, who is very much looking forward to the Final in Bordeaux pointed out.

Boyd Exell (AUS)
Reigning World Cup and world four-in-hand Driving champion Boyd Exell won four out of the six competitions in which he took part this season. Exell won in Stuttgart (GER), Stockholm (SWE), Geneva (SUI) as well as in London Olympia (GBR), where he performed with a wildcard. In Mechelen (BEL) at the end of December he finished in an uncharacteristic sixth place, which was probably the result of the family’s move to the Netherlands between Christmas and New Year. At the series last qualifier in Leipzig (GER), where he also started with a wildcard, the Australian finished second behind Koos de Ronde. Exell has been very successful this season, driving his new leader horse Poker.

Koos de Ronde (NED)
Koos de Ronde, who was crowned FEI World Cup™ Driving champion in Bordeaux in 2013, won the qualifiers in Budapest (HUN), Mechelen, where he competed with a wildcard, and Leipzig. This season the Dutch driver had put together a new indoor team in replacement of the old one which had partly consisted of the piebald horses of his father. De Ronde started off very well in Budapest, but had somewhat of a disappointment in London Olympia where the settings of his team let him down. In Mechelen and Leipzig however, the Alltech FEI World Equestrian Games™ 2014 in Normandy team champion recovered his winning mood and was crowned the qualifiers’ winner.

Fredrik Persson (SWE)
Fredrik Persson had some amazing performances this season with his team of Swedish warm blood horses, the youngest of which is 17 years old. Persson, who was respectable 10th in Normandy, had only three starts this season having placed 10th in the summer standings. The driving instructor at the national equestrian school in Flyinge came second in Stockholm and Mechelen and third in London Olympia, which resulted in his third place in the series standings.

IJsbrand Chardon (NED)
Fredrik Persson and IJsbrand Chardon tied for the third place in the FEI World Cup™ Driving standings. Chardon finished in second place in Stuttgart, Budapest and London Olympia, driving his team of Lipizzaner horses. The four-time world champion was well on his way to victory in the series last leg in Leipzig when he suffered an unfortunate tip-over. Chardon is considered a serious candidate for the FEI World Cup™ Driving title alongside Exell and De Ronde, especially since his new trump Aladin adds extra speed to his team.

Christoph Sandmann (GER)
Germany’s Christoph Sandmann, the winner of the FEI World Cup™ Driving Final 2008, will return to Bordeaux for the first time since 2002. Sandmann finished third in Stuttgart and in Geneva and came in fourth in Mechelen, which allowed him to secure his ticket to the Final. The multiple German team medallist, who won the marathon at the Alltech FEI World Equestrian Games 2014 in Normandy, has not competed in a Final since 2012.

Georg von Stein (GER)
Reigning German four-in-hand champion Georg von Stein competed in five FEI World Cup™ Driving events this season, using two new bay Lipizzaner horses in the lead, who kept improving at each competition. Von Stein received wildcards in Stuttgart and Leipzig, where he finished fifth and sixth respectively. A riding instructor by profession, he placced third in Mechelen, fourth in Budapest, and fifth in Geneva. It is the first time that Georg von Stein has qualified for the Final. In 2011 he was invited to compete at the Final in Leipzig with a wildcard.

Wildcard
The wildcard for the FEI World Cup™ Driving Final 2015 was allocated to French driver Sébastien Mourier, a marathon specialist who placed fifth in Normandy last September. It is the first time that the 35-year-old will compete in the indoor FEI series.

Course designer
Dan Henriksson of Sweden has been appointed the Course Designer for the FEI World Cup™ Driving Final 2015. He has been responsible for the course of the Stockholm leg from the series’ onset in 2001 and also built the courses for the Finals in Gothenburg from 2002 to 2007 and in 2009.

The Jack Pemberton trophy
Honorary FEI Bureau member Jack Pemberton (CAN) has generously donated the trophy, which is awarded to the winner of the FEI World Cup™ Driving Final. The first Jack Pemberton trophy was presented to Australia’s Boyd Exell after the 2012 Final. Jack Pemberton, who chaired the FEI Driving Committee form 1995 to 2003, has been involved with the FEI since 1968 and has made a huge impact on equestrian sport. He has been part of over 20 equine associations in his life. He was made a life member of the British Horse Society and the Canadian Combined Driving Association. In 2007 Jack Pemberton was the inaugural recipient of the Equine Canada Lifetime Achievement Award.

Scoring
According to the scoring system introduced for the FEI World Cup™ Driving Final in 2012, 50% of the score differential between each driver and the leading driver from the first competition on Saturday evening converted into seconds will be carried forward by that driver into the competition on Sunday. Scores from the first round on Sunday will be carried forward by the qualified drivers into the drive off.

The FEI World Cup™ Driving Final in Bordeaux will be broadcast live on FEI TV, the FEI’s official video platform, according to the following timetable: 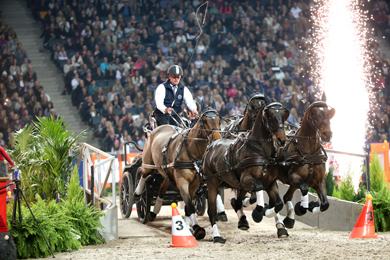