Great Britain has closed to within two points of Germany in the FEI Nations Cup™ Eventing 2013 after a convincing victory at Montelibretti (ITA) at the weekend.

The British quartet, all of whom were competing in their first FEI Nations Cup™ Eventing competition this year, finished first, second, fourth and sixth, with Nicky Roncoroni leading from the start to take individual honours on the Irish-bred Trig Point.

Emilie Chandler was second on the impressive nine-year-old Coopers Law and Paul Sims was fourth on Calador. Dani Evans, who has just graduated from the Young Rider ranks, slipped from third to sixth after incurring 18 Jumping penalties on Raphael ll when the horse became a little “free” over what was described as an up-to-height track with plenty of related distances. All four achieved clear Cross Country rounds inside the optimum time.

“They all went well and it was a very pleasing result,” said team manager Philip Surl. “When we walked the course we thought there were quite a few places where you could make a mistake, and also that the time would be hard to get. Paul was riding on a team for the first time and he did a great job as trailblazer - cool, calm and collected.

“It was quite a logistical challenge for us to get down to Montelibretti and involved two overnight stops, but the horses all arrived well and we had a couple of personal bests in the dressage.”

Emilie Portale was the best of the Italian team, third individually on Rubens Delle Sementarecce, backed up by Roberto Riganelli and Stinger du Meugon, fifth, and Pietro Sandei, 11th on Mouse, a horse he bought from Mark Todd (NZL). Marco Cappai withdrew Sunshine Sweet before the Jumping phase.

Italy is now fourth in the FEI Nations Cup™ Eventing leaderboard behind Germany, Great Britain and New Zealand with two events to go, Waregem (BEL) this weekend (26-29 September) and the last leg at Boekelo (NED) on 11-14 October.

The Germans fielded their top championship combinations at Fontainebleau (FRA), Houghton Hall (GBR) and Aachen (GER), but they sent a new trio on the long journey down to the Italian military base just south of Rome. Robert Sirch finished best in seventh on Killcross, but Bodo Battenburg was hampered by a Dressage mark of 75.2 on Cadgold and Martin Drescher had to withdraw Gandalf VM before the final Jumping phase.

Britain has concentrated on a designated pool of up-and-coming riders for the series this year, aided by funding from UK Sport, with the aim of giving younger riders team experience. Laura Collett, Lucy Wiegersma, Izzy Taylor, Sarah Bullimore and Jodie Amos will be travelling to Belgium this weekend, where Philip Surl is hoping to overtake the mighty Germans. “If we can pick the right horses, we should have a good team and just might have a chance,” he said. “This is a great series and I think it will grow and grow.” 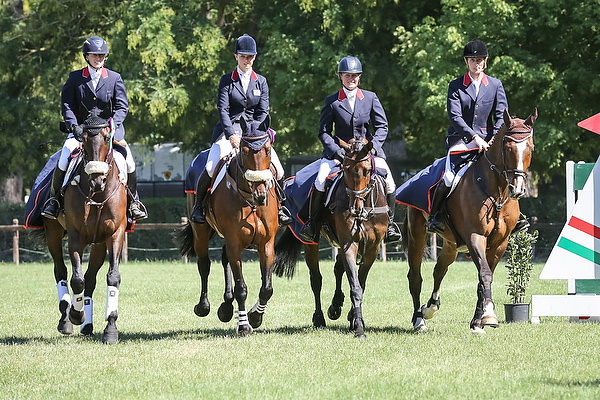 The FEI’s first team Eventing series, the FEI Nations Cup™ Eventing, is open to all nations fielding one team composed of 3 or 4 riders at each leg. The series runs under FEI Eventing rules at CICO and CCIO 3* level and riders accumulate points under a dedicated system created for the new series.