A total of 22 vaulters from seven nations travelled to the famous Salon du Cheval de Paris event to showcase their carefully choreographed performances.

Jacques Ferrari, the 25-year-old fitness coach from Saumur in western France, was a major draw in Paris. He won all his international competitions in the 2013 summer season, as well as the European Championships in Ebreichsdorf (AUT) in August, and continued this success seamlessly in Paris.

In both freestyle-to-music rounds he scored the highest marks with his Lucifer act on Poivre Vert, lunged by François Athimon, and finished with an overall score of 8,765.

“We had a medium beginning but a better second round, because we tried not to make the same mistakes twice”, Ferrari said. “I was not fully satisfied with the performance as we are now working on a new freestyle for 2014. I have changed some things as well as the sequence for the World Cup, and my freestyle is not as safe as the old one. It has been a great competition and particularly good preparation for next year’s World Equestrian Games.”

Joanne Eccles yet again proved her outstanding skills and vaulting capability on WH Bentley, lunged by her father John Eccles. With a score of 8,231 points for her Alien freestyle theme, the 24-year-old dentist was unbeatable in both rounds. Her sister Hannah, who finished second (7,759), also on WH Bentley, made this a sweet 1,2 victory for the Eccles family.

“It was fantastic to win the World Cup in Paris,” said Joanne Eccles. “It's a shame we’re not able to compete at any other competitions in this series, but we are very grateful for the wild cards and it was a fantastic way to end 2013.”

Lucy Phillips, who has been vaulting since the age of six and is currently ranked eighth in the FEI World Vaulting Rankings, secured third with 7,730 points on Pitucelli, lunged by Elisabeth Phillips.

Cologne-based Pia Engelberty and Torben Jacobs (GER) vaulted to victory in the pas-de-deux for a successful return to competition after an injury break for Engelberty which kept her out of the first two legs of the series.

The pair celebrated their first FEI World Cup™ Vaulting pas-de-deux win with a score of 8,548 on Danny Boy, lunged by their coach and former World and European Champion Patric Looser.

“We are very pleased that we have started so well in the World Cup,” said 21-year-old medical student Jacobs. “It was a great feeling, especially after a difficult and late start into the season. We really had fun with our freestyle and particularly our music. We have reached the point where we can enjoy our gymnastics on the horse.”

"Of course it is a great feeling to win a World Cup, especially against such talented competition”, added 23-year-old sports student Engelberty. The pair now plan to head to “Partner Pferd” in Leipzig GER), the fifth leg of this series, in their bid to qualify for the Final in Bordeaux (FRA).

The Eccles family scored second place in the pas-de-deux on 8,322 points, with the USA’s Kimberly and Cassidy Palmer, winners of the second leg of this series at the German Masters in Stuttgart, came in third on Leon, lunged by Wolfgang Renz on a score of 7,306. 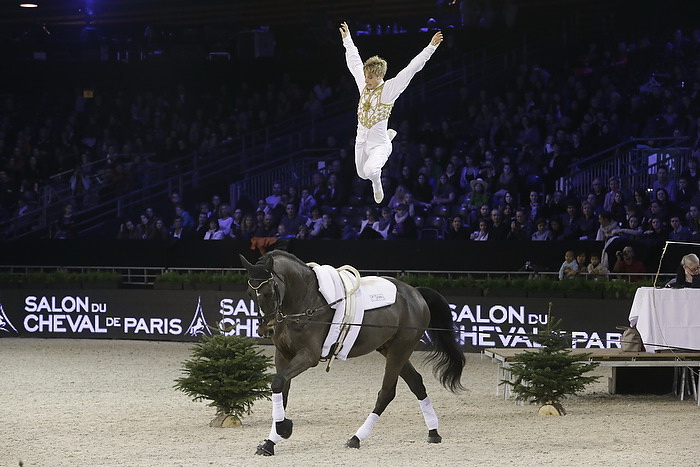